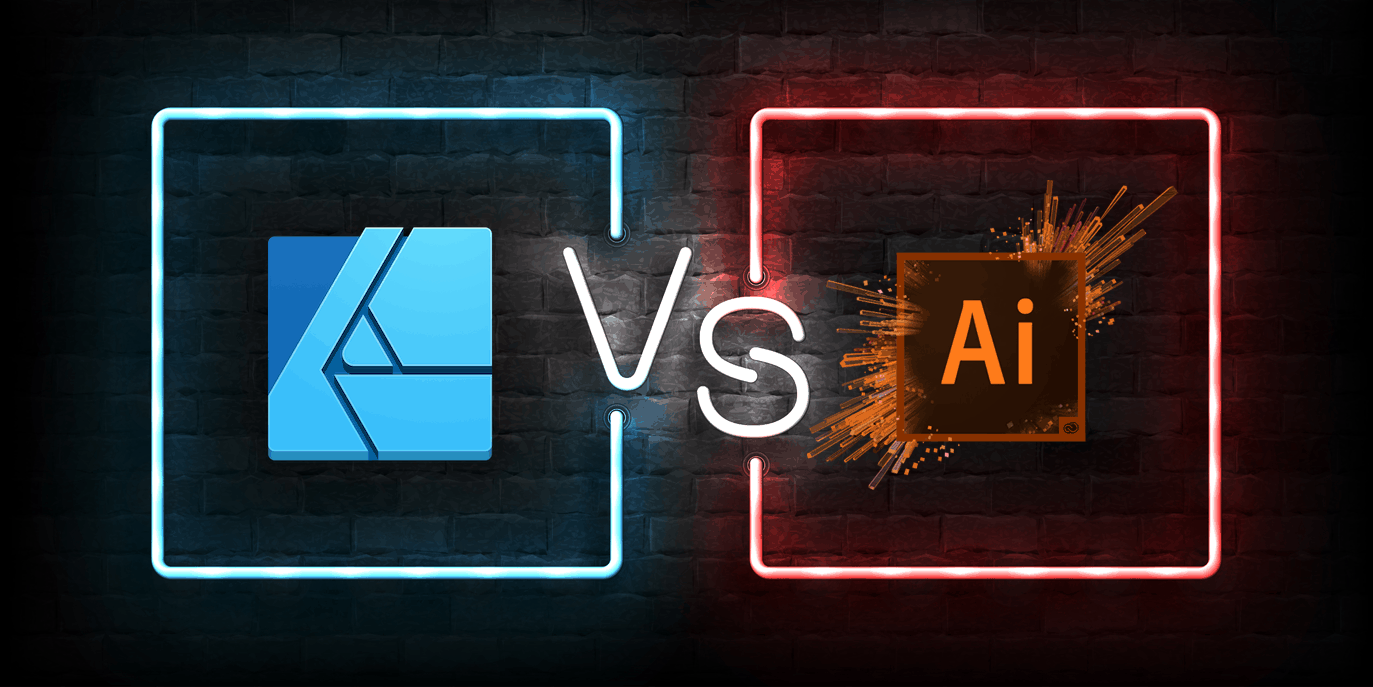 When it comes to creating some of the highest quality of graphic designs, several software choices triumph in this industry.

Having already compared the immensely popular Inkscape and Illustrator against one another, here we attempt to determine the better choice between that of Affinity Designer and Illustrator.

Focusing on issues such as background, best features, flexibility, ease of use, and pricing, we highlight both software packages, alongside detailing any potential cons of Affinity Designer and Illustrator in action.

The Background of Both Software Packages

Largely due to the intensive rebranding of their software, spanning no less than five years of reworks, this software is aimed at improving overall workflow while allowing individual creativity to shine through.

An award-winning designer, Affinity has been crowned with App of the Year, Application Creator of the Year, and even given the prestigious Apple Design Award Winner.

Adobe Illustrator also makes claims to be an industry-standard graphic software that is used by millions of designers and Illustrators worldwide.

Creating the most detailed and striking of designs, Illustrator believes there are no limits to what their software can visually create – and all with a faster and more precise finish each time.

A pioneering company, Adobe Illustrator is one of the world’s largest software companies and thrives on digital media and digital marketing innovation.

Both Affinity Designer and Illustrator certainly score highly for their extensive features. Here are just a few that we rate as some of the most impressive offerings for both packages:

Affinity Designer vs. Illustrator for Flexibility and Ease of Use

The ability to use your chosen graphic software with ease may be top of your list. This is especially so if you plan to use it regularly and need it to work for your specific requirements, day in and day out.

However, we realize that not all users of graphic software have an in-depth graphic or illustration knowledge nor background and, therefore, may be concerned with the flexibility of such software packages.

Though Affinity Designer and Illustrator have some extensive and in-depth features, they aren’t overly difficult to use when creating projects.

One of the major things designers and illustrators love about Affinity Designer is its simplicity when it comes to working on it.

This is a fantastic choice for beginners to start with, and a great way to access a practical learning tool.

However, Affinity Designer is also well recommended for those graphic experts who are looking for a more powerful graphic design product.

Affinity Designer allows users to work with vectors in the most efficient ways while making the entire creative process one of the simplest.

Thus, this is a package whereby you can play around and find your feet sampling many of the additional features it has to offer without major hassle.

Overall, Affinity Designer’s entire flexibility and ease of use ultimately mean users can think more creatively and, therefore, less technically. This means it allows the creative mind to wander and soar while not getting too bogged down with the how’s and whys.

Individuals, professional designers, and or course smaller businesses needing effective but deliverable graphic design solutions can all benefit from the accessibility and functionality of Affinity Designer.

What’s more, the many video tutorials available on the Affinity website are more than capable of taking you from the basics to professional standards on this package in next to no time. 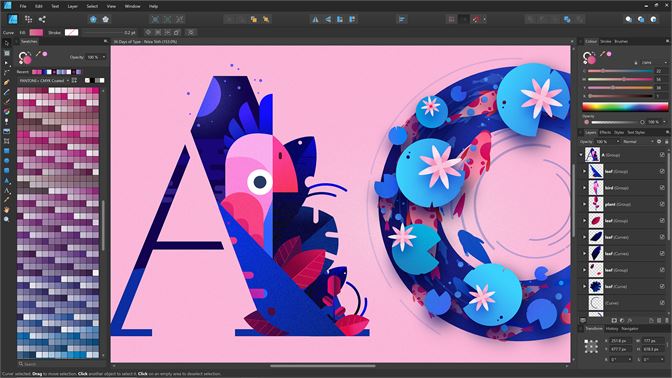 Whereas Affinity Designer is a most simplistic interface and encourages beginners and professionals alike, Illustrator is perhaps the slightly more complicated to use from the two.

However, if you’ve got good graphic and illustration knowledge and find such applications easy to pick up, you may well have the advantage here over those lesser experienced users.

This in no way though detracts from the flexibility that Illustrator offers for creativity. The integration process, automatic alignment, and indeed sheer stock of creative resources allows for plentiful projects.

A flexible tool when it comes to the creation of vector-based graphics, the many features you can work through here ensures that creativity will never run dry as users are encouraged to both create and practice throughout their time spent on Illustrator.

However, for those new to the software, and beginners to designing and illustrating, it’s still worth accessing the software and using it side by side with the extensive learn and support section that is offered on the website.

Here you’ll find sections to take you from the very basics, through to the more expert of sessions while working on expanding your skills throughout.

Furthermore, if you do have some knowledge of the plentiful Adobe software packages, then you’ll be better prepared to use Affinity Designer.

Affinity Designer vs. Illustrator for Price

In general, the prices that you can expect to pay for a software package will tend to vary greatly.

There are a few graphics packages on the current market that cost nothing. But, it’s usually assumed you’ll have to pay out for some elements of a decent working design software choice somewhere down the line!

The question here may well be just what you’re willing to spend on your graphics package. This may be more to do with how often you intend to use the application and whether your intended use is personal or professional.

There are three pricing options for Affinity Designer that we believe are very well rated for what you get in this graphic software.

For those using the software on Mac and on Windows, you can opt for a free trial of the software before purchasing it for around the $60 plus mark.

Or, if you’re intending to use the software on an iPad, though there is not a free trial as such, there is a very low price attached here, around the 25 dollar mark.

Affinity Designer doesn’t have any hidden subscription charges, and these are all the only prices you’ll pay to own the software. Then, each time there’s an update, you’ll automatically receive this.

Once again, Illustrator also requires payment to use, but unlike Affinity Designer, this will cost more to purchase.

However, Illustrator does offer a selection of price plan choices based on your exact design needs.

For individuals, there is a photography plan, a single app, all apps, or all apps plus Adobe stock. With prices starting from 10 dollars plus per month and ranging through to 100 dollars plus, users can select to pay for their software every month or annually.

Illustrator also goes on to offer business plans, student and teacher plans, and schools and university plans, so there are several more payment choices here as opposed to Affinity Designer.

Limitations of Both Affinity Designer and Illustrator Packages

Now that we’ve covered some of the many pros of purchasing and using both Affinity Designer and Illustrator, we should also direct your attention to possible limitations of either package.

All software packages, when used over time, will present minor grievances and disadvantages. Sometimes, the only way these become apparent is by ongoing use!

Here we offer some potential limitations that you may well find with these two graphic packages.

Before we get onto our final thoughts and the interest of fairness.. check out the video below from Affinity Revolution comparing Affinity Designer and Illustrator – always good to get a second opinion!

When deciding between these two industry giants, it can often seem as though the two are on a par with one another. This makes it difficult to suggest which one comes out on top!

However, our expert opinion, having worked in this industry for many years now, suggests both are equally as good as one another – but it may all come down to your current level of user experience.

Affinity Designer is certainly the more accessible when it comes to catering to beginners and those with minimal graphic and illustration experience.

Illustrator, on the other hand, is often the more preferred for its increased extensiveness and more professional interface, encouraging the more experienced and professional of users.

Both software packages are, once again, applications that we here at HeatPressHangout are happy to use on various occasions. We’ve personally found that the best one is all about personal choice when working on selective projects.

Therefore, if you’re looking to get quality design solutions from your graphics software package and want to be assured of selecting the most reputable to get your projects completed successfully first time round – we recommend trying both Affinity Designer and Illustrator for yourself and see which one works best for your individual needs and requirements. 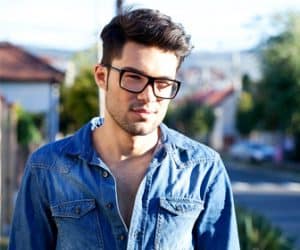 I’ve put together this blog to help out beginners looking to design their own t-shirts or anyone ready to start their very own printing business. Enjoy! 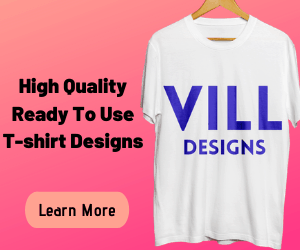